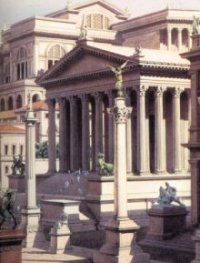 Not without reason did gods and men choose this spot for the site of our city - the salubrious hills, the river to bring us produce from the inland regions, and seaborne commerce from abroad, the sea itself, near enough for convenience yet not so near as to bring danger from foreign fleets, our situation in the very heart of Italy - all these advantages make it of all places in the world the best for a city destined to grown great. ~ Livy, History of Rome, Book 5.

The Roman historian Livy began writing his history of Rome in 29 BC when the city's history was already glorious and its supremacy in the Mediterranean was unquestioned. Not surprisingly, he assumed that the greatness of Rome was predestined and inevitable. In fact, greatness had not come quickly. The hills of Rome had been settled for at least seven hundred years before the city expanded from a relatively small territory on the plain of Latium and achieved the domination of the Italian peninsula in the forth and third centuries BC.

It has been said that all roads lead to Rome but the story of Italia is not just that of Rome. Come join us as we discuss the history of all the inhabitants of Italia - the enigmatic Etruscans, the influences on Rome, and the enemies and allies of Rome.