Europe was and remains a cauldron a melting pot of peoples and cultures. Already from long before Roman times people and ideas fluctuated. In the period prior to AD 1000, Germans, Celts and other peoples moved, settled, diffused and disseminated ideas. When the Roman Empire slowly transformed (from circa 284 on) and territories disintegrated into so-called barbarian states, there was born a new spiritual unity in Europe: The Roman Catholic Church. During this time the culture of classical antiquity was saved by the church and by the successor states of the Roman Empire, and subsequently enriched with their own ideas and culture. Thus was laid the foundation for our modern world.

Our journeys will take us from Rome to Aix la Chapelle and Rome again. We discus the political transformation from the end of Roman Empire till the year 1000 when the Holy Roman Empire with emperor Otto III was at its apogee and he took up residence in Rome again. Franks, Vandals, Longobards, Saxons will swarm these roads, as well as Goths and Berbers battling for Spain and southern France. The Vikings -- adventures, destroyers and builders of states, with their literature and mythology, shall join us in this Region. 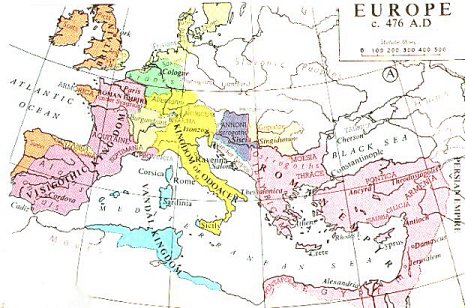