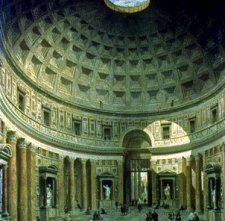 Four years after Actium, Octavian walked into a Senate well disposed to his wishes and announced the restoration of the Republic. He was ready to set aside his formidable powers and become a private citizen once more. To no one's surprise, the partisan Senate 'refused' to allow him to step down and gave him the quasi divine title of Augustus which was a slightly archaic word meaning sacred or revered. Octavian's powers were formalized and Rome had given herself its first emperor.

It has been said that Rome was an empire long before she had an emperor. In the world of wealth and intrigue that was Rome, the emperors held supreme power but only at supreme risk. Of the first 12 emperors, only 4 died peacefully in their beds: 4 were assassinated, 2 committed suicide, and 2 more were most likely murdered, one by poison, one by suffocation. Those who died peacefully were not spared conspiracy. But despite the eccentricities of the individuals who ruled her, Rome became the world's first true superpower.